Disclaimer: These are random notes and are not intended to be an exhaustive retelling of the presentations this week. Please forgive spelling and grammar errors.

OSTC - Update on the work OSTC is doing with PHP

An un-presentation about the future of open source on Windows by Garrett Serrack, Stephen Zarkos, and Tom Hanrahan of MSFT Open Source Technology Center

Open source applications running on Windows tend to ignore the benefits of the Windows platform by being tricked into thinking they’re running in a Linux environment.

Building from Source (on Linux)

Building from Source (on Windows)

Because it’s Windows, not Unix!

Building PHP from Source (on Windows)

The PGO optimized version of PHP runs 20% faster on Windows than PHP does on Linux. (With caveats.) So, we see that if we build it right and we use the right tools, then we can build something that works very well on Windows.

How about Cygwin (or SUA)?

We want all the platform benefits of Windows and easy automation and large selection of apps.

How do we get that?

Build some sort of common open source application publishing platform. This won’t magically appear like it is on Linux because on Linux it grew up over time around community development.

We need your participation!

Garrett is working on a program and a platform for getting community involvement to develop and build these tools.

Now Garrett is sketching out on the white board his ideas for how this program will work.

Garrett already has incomplete code for this and, once he gets permission, he will be publishing it for community review and participation in the process. He’s just waiting on word from people higher up in the company. The code will definitely be under an open source license, likely under the Ms-PL, but that’s up for discussion. 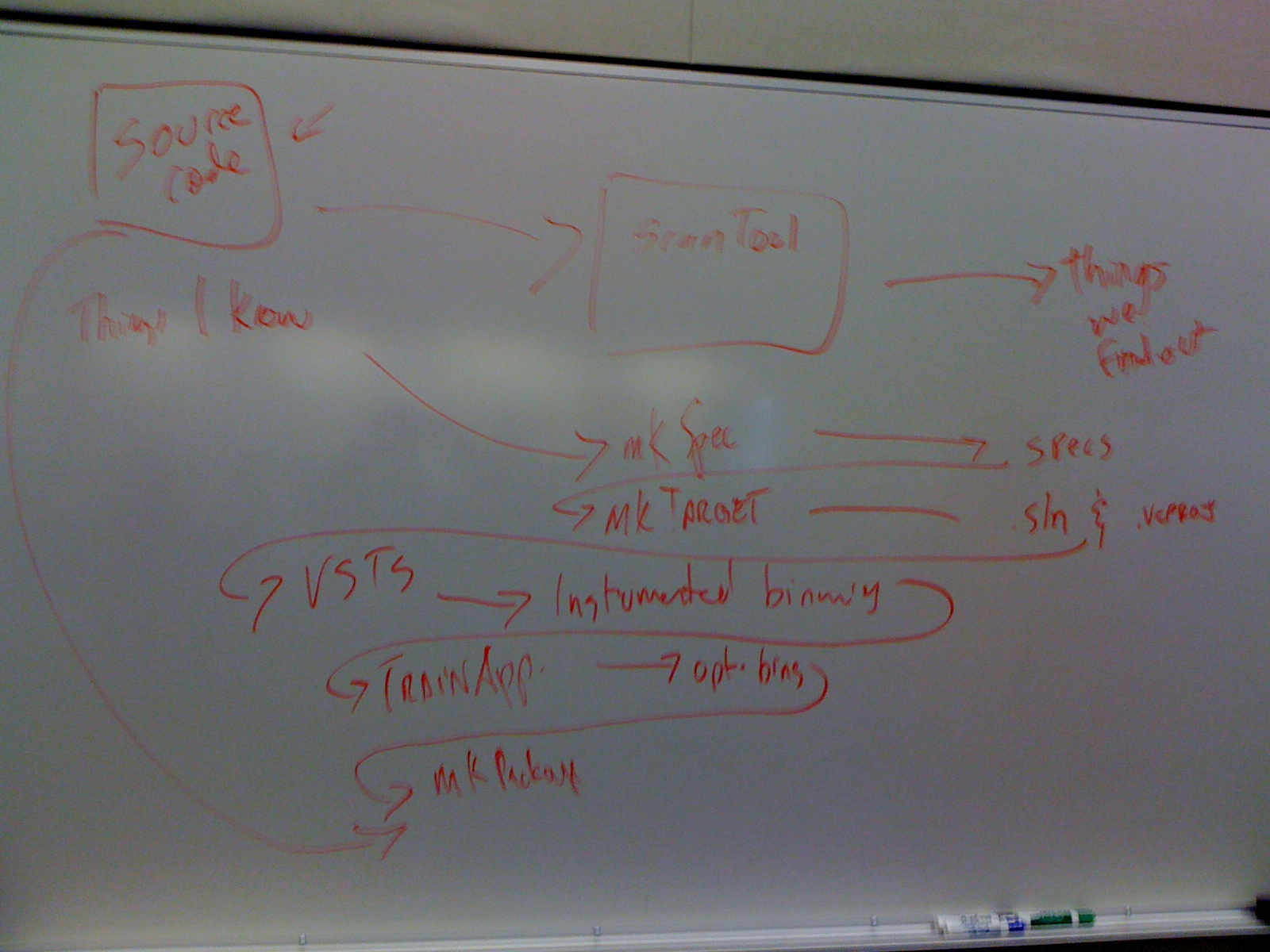 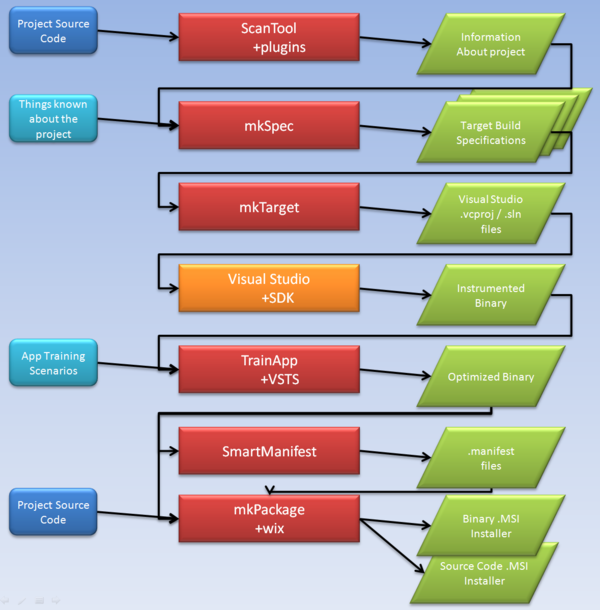 Strategy for Windows Server 2008 and Later

Introduced Web Extensions for IIS 7.x to extend the functionality of IIS.

Moving too fast through slides with lots and lots of text on them, so it’s difficult for me to capture it all. I apologize for the gaps.

Getting the Stack with Web Platform Installer

Make it simple to license the Web Stack

A “VAP” is a Microsoft term for “value added partner.” They are typically web consultants and small businesses.

For the PHP engine…

Side note: any Microsoft employee now has clearance to contribute to PHP core, APC, and several other extensions. The WinCache code base has been contributed to PECL, and their contributions to APC are being contributed back.

For the PHP apps…

Presented by Mark Brown of the Web Platform team.

(Poorly named, since they can’t get into a lot of the futures stuff right now until Thursday during the NDA sessions, so they went back to discussing IIS, and Mai-lan co-presented with Mark on IIS features.)

Demonstration of installing WordPress and its dependencies using the WebPI.

Developers need to develop using the Expression tools. End-users can install the Silverlight plug-in to view the video.

Developers can create their own extensions for IIS using the extension API. Microsoft IIS team is, by far, the biggest user of this API, but some hosters use it to provide special functionality on their web servers, and it’s open for all developers to use. Developers may publish their extensions under open source licenses without violating any Microsoft agreements.

Moving on to do a WinCache demonstration with Ruslan.

Please note that these quotes are not often exact. Many are paraphrased, so let me know if I need to correct anything or modify/clarify something that was said.

I was too busy presenting and taking part in discussion during Rafael’s and Lig’s (and my) presentations, so I didn’t get any notes from them.

A State of the Union for PHP Women (Ligaya Turmelle)

Showing a code example in .NET.

“Not really language integrated, but we’ll see were we can go.”

Others in the room suggested helping getting this implemented as a PHP extension rather than a userland library.

Showing a code example in PHP.

How do I describe what our open source strategy is? Fundamentally, when thinking about our platforms, you have to be open, so our strategy is in making our platforms more open. Being open is the future.

The future involves operating in the Cloud, and the Cloud is about open technologies working together, so the approach Microsoft is taking is to be more open in order to work in the Cloud.

“Why isn’t there a PHP gallery on there? Well, why not? There would have to be a group that sponsors that gallery. It could be Drupal, WordPress, etc.”

Microsoft Research has over 700 employees worldwide.

How can we decrease our costs?

“I want to focus on software.”

Tiny optimizations on algorithms can save tens of millions of dollars.

Demonstration of issues in Visual Studio.

Unfortunately, I needed to take a break at this point, so I missed capturing notes on the remainder of this presentation, but the last third of this presentation was an overview of the Gazelle browser kernel, which provides principal-based isolation for all resources and all types of web content. It was a very interesting presentation, and if I can get access to the slides, I’ll post them here.

Papers by Helen Wang about Gazelle and ServiceOS:

To get processes sorted by memory usage in Powershell:

Get just the names:

Get the type of the first 5 processes:

See what would have happened if I killed all the first 5 processes:

These commands are really aliases to Powershell scripting commands to make things easier, comfortable, familiar. For example, ls and dir are aliases to Get-ChildItem.

See where you can cd into:

“The console is just a host for PowerShell itself. There is no spoon.”

PowerShell scripts can run in other run spaces (not just at the console).

Shows an example of extending commands. In this case, he extended dir to show exif properties from .jpg files.

The SDKs aren’t really necessary since the platform is fairly open with HTTP requests (REST), but Microsoft built them for easy-of-use.

Showing the architecture of a sample application called ImageCloud.

Now showing a demo of the ImageCloud application.

“In full disclosure, you’ll notice that Maarten switched to Visual Studio to do the worker role. We’re working on this for Eclipse at the moment.”

Sumit skipped through the slide since no one here is interested in seeing an Eclipse demo, so I didn’t capture the rest of the notes.

You may use the SQL Server driver for PHP (only on Windows for now).

You might have also heard of these as “oData.”

A bridge between PHP and .NET using RESTful services.

Josh pipes up with, “Can we see some code? This looks pretty complex. I think we’d be able to better visualize what’s going on with code.”

Tutorials for PHP with Silverlight: http://php.miniprojects.org/

The ASP.NET Ajax Library was contributed to the CodePlex Foundation.

The library is now open source and supported by Microsoft. Microsoft also offers support for jQuery.

Learn how to use the ASP.NET Ajax Library at: http://www.asp.net/ajaxlibrary

The library is released under the New BSD license.

“There is no PHP community in the way that people tend to think of. There is no all-encompassing group. Most people here deal with PHP proper [core]. Others tend to use PHP incidentally, such as Joomla, WordPress, and Drupal developers, and they don’t see themselves as being in the same community.

This leaves a void in the community. “My fear is that, in the long run, we’re going to lose talent at the core because that’s not where the money is going to be.”

Discussion ensues. Lot’s of good stuff. Hopefully someone else will blog about this discussion. hint hint

The value of unconferences with and without traditional conferences (Keith Casey)

Keith: “Does everyone know what an unconference is?”
David C.: “It’s a massive party.”
Keith: “Yes!”

PHP on Windows from the community’s perspective (Liz Smith)

Discussing the history of PHP on Windows and how she got involved in the project.

What we (Microsoft) need from you

Community Evangelists: What we do…

“Ultimately, we’re about the platforms we think are going to help you guys.”

Key to an Evangelist’s heart

Dream job is at the center where all of these meet.

Discussion about how the developer evangelists can help us in our local areas.

Very willing to support PHP user groups with space, pizza, beer, money, etc., depending on the needs and the availability of funds. Don’t hesitate to contact your local community developer evangelist.

Feedback: We want some sort of central DPE website where anyone in the world can check their area on the site and see who is their local community developer evangelist and contact them directly.

In the meantime, just contact Josh, and he’ll find that information for you.

Josh: “How do we make that leap from being ambassadors of goodwill (and people who buy you beer) to being drivers of adoption?”
Cal: “Website Spark is a great example of where you guys can get us involved.”

Lot’s of discussion on how DPEs can help people adopt Windows Server as a deployment platform.

Using this time to talk to the three different CMSes represented.

Points made on the board:

Not NDA (I think), but I didn’t take notes, so if it’s not NDA and someone else took notes and wants to have them posted here, send them to me.